Vacation and what happens now...

Oh, how I love vacations! I have been extremely blessed over the past few years to be able to take my little family on vacation. This year, we decided to go early in the Spring instead of summer when it's so hot. Which worked out fine. We did a ton of walking in Atlanta because the weather was so nice. Things didn't start cooling down and raining until the last day in Pensacola.

This is the first time I have ever went on vacation and really TRIED to stick to a strict plan of eating. At times, I feel like I started obsessing. At times, it really stressed me out. But overall, I think I did ok. The first night I had soul food from a famous place in Atlanta (Mary Mac's Tea Room). The next day I picked at Chinese food (but it was horrible and not worth it). The third day we at dinner at a buffet in Tallahassee and I tried to choose lean meat and lots of veggies. But the last full day (in Pensacola) was where things went downhill.

I was able to cook breakfast at my sis-in-law's that morning, and between the drive to Pensacola and the beach and shopping, it was 9:30 p.m. before we had dinner. Other than a few snacks while driving to the beach early in the day, I hadn't eat. So I was hungry. And tired. And cranky. And my kids were on my nerves.

So I ordered a chicken pot pie and sweet potato fries from O'Charley's. And I convinced myself that it was the last night of vacation and I deserved it. And I enjoyed it SO much.

But the next morning I got up and at the leftovers for breakfast. And then proceeded to eat two blueberry muffins from the hotel's continental breakfast bar... Don't even ask me why I did that. I don't know why I lost my sanity. Muffins???? Where in the hell are they on my plan?

So on the way home, I was damned near emotional about the muffins. So at a stop at McDonald's for some coffee and fast food for the kids, I ordered a BIG MAC. Yes, you read that right. A BIG MAC. (And it was just as good as I knew it would be.)

I knew my day had officially gone to hell. And I began to panic.

What did this mean? Am I off the wagon? Am I out of control? Will I be able to get control back? Oh, God... please help me. I can not fail this time. I HAVE to get back on track.

So after the 7-hour drive home, the kids were chillin' and I read on Facebook that a good friend of mine was at our local Chili's having a 'rita. So I decided to join her. Because a margarita could only make this day better, right?

I had my margarita, but my friend and I also talked about the 60 lbs that she has lost recently, and I was instantly re-inspired to get my butt in gear. I knew that Sunday, March 23, 2013 was just a bump in the road. I knew that I would wake up on today, get back on plan, and keep moving forward.

And that's exactly what has happened.

But the crazy thing, is that when I stepped on the scale this morning (to assess the damage), this is what I saw... 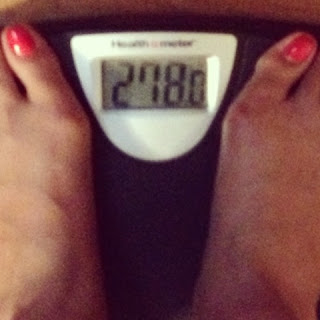 How could it be? I'm back down to my lowest weight from the beginning of March. The four pound gain that I've been stuck with is gone. I stepped on the scale about 20 times... even moved it to different places around my room. 278 to 279.4 was the number each time. I've been stuck at 282.
Soooo, that was definitely motivating. Today, I have eaten clean and drank a ton of water. My plan is to stick to fish and veggies for lunch and dinner this week, and eggs/protein powder/veggies for breakfast. Five days straight. As a sort of detox. Because on Good Friday I'm hitting the road again for Missouri for Easter. And it's going to be lots of food temptation, as well as emotional stuff going on because I'll be seeing my mother. With Alzheimer's I never know what to expect, but either way it's so emotionally draining. I'll have a plan for my food before I leave town, and it should be easy since I'll be staying with my sister and we mostly eat in. I'll figure it out.
So here's to a great day back on track! Tomorrow I'll be back at the gym and I'm SO excited!
Posted by Hollie at 5:55 PM