Thank you for all the feedback from my last post. I am okay now... still a little down, but ok. I am holding on to the fact that I am doing what I am supposed to be doing and making healthy habits. It will all come together... eventually. Like one person said, I have to have patience.

But there were a few comments that I would like to address.

Just to make it clear, I do not eat my exercise calories. The only time I dip into that number is if I go over unintentionally. Since I am never sure of exactly how many calories I am burning, I just leave them alone.

One other person said that I am eating too many calories, and that I should cut down to around 1200.

I weigh 312 lbs. From most if not all of the research I've done, low calorie diets are no good. First of all, I can't eat 1200 calories per day for the rest of my life. Second, for someone of my weight who is exercising like I am, 1200 calories just isn't enough to keep me going. I've tried low-calorie diets before, but I am HUNGRY. I don't like being hungry. If I'm hungry, I won't stick to the plan, no matter what it is.

And I need something I can stick to for life. That is why I also try to stay away from diet plans that restrict whole food groups. Although I know I need to cut down on sugar and processed foods (and I do), I don't ban them from my diet. When I tell myself I can't have something, it just makes me want it more.

Another thing that several people mentioned were that I need to stop drinking the Vi-shakes. The thing about shakes... either you love them or you don't. I happen to be a shake lover... not just the Vi-shakes, but Slim-Fast and other types, too. I love me a good smoothie! I am just as satisfied by drinking a meal as I am eating one. And it really helps me with portion control and overall convenience. Will I drink Vi-shakes for the rest of my life? Based on cost alone, probably not. But I do know that I can always incorporate some sort of smoothie/shake into my lifestyle. As long as I have a blender.

The way I look at it, the shakes have really helped me get into a routine of making good choices for at least two meals daily. I love the way they taste, and I love the variety. I know they are processed, and not "real food", but for now, I think the benefits out weigh the risks...

But speaking of the Vi-Shakes...

My ex-husband brought up a very good point the other day. He has been really helping me since I started the 90-day challenge, and also reviews my meals each day on MFP. He is close enough to know that I'm making good food choices, exercising my ass off, and being accountable. But he pointed out that the only thing he can see that I am doing different this time as compared to the last times that I have buckled down and lost weight is that I am drinking the Vi-shakes instead of Slim-Fast or another type of protein for my smoothie.

What REALLY got me thinking is a few articles he found on the internet about the soy in these shakes, and how they can actually have a negative effect on some people.

I did more research on my own, and there is way more research pointing to the GOOD stuff in these shakes, but I just have to make sure. Because he is right... even when I did my 30-day challenge back in February/March, I was not working as hard as I am now and the weight was coming off at a good rate. I was drinking Slim-Fast then, though. Even with the addition of weight training, I should have lost more than 7 lbs in the past 7 weeks...

So for ONE WEEK I am not using the Vi powder for my shakes. I will use another type of protein (which I haven't found yet). Today has really been hard so far because my go-to breakfast and lunch are gone. I don't have another source of protein for a shake, and that's really all I want! So I will have to go to the grocery and find something.

I am really thinking that the Vi-shakes are not what is causing my 5-week plateau, but I have to make sure. So I weighed this morning and will weigh again on next Thursday morning. We shall see.

If the scale moves significantly, I know what the problem is. If I am still stalled out, I will go back to my Vi-shakes (because I really do love them!) and keep trying to change other things until I find what I'm doing wrong.

I took these pics yesterday and they really helped me see that I have made some progress... 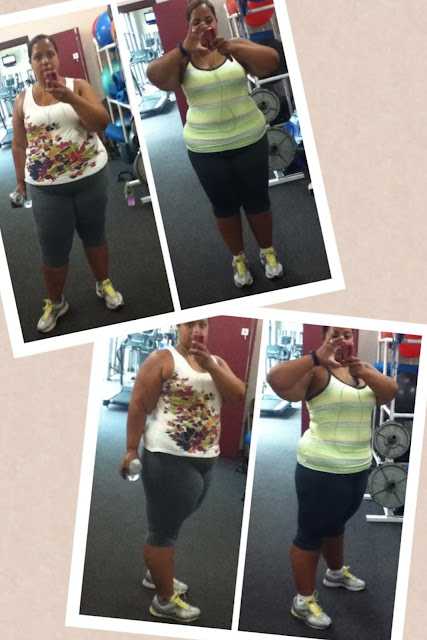 I was actually able to see a calf muscle this morning in the shower. Talk about non-scale victory! This will have to do for now!
Posted by Hollie at 1:31 PM