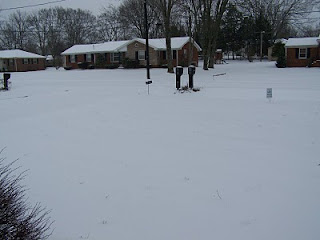 This is how my front yard looked when I woke up this morning! Middle TN is covered in snow - the most snow I've seen in this area for a long time. It started snowing yesterday and was pretty mushy and wet, but accumulated enough to play in at the end of the day. The kids and I had a blast playing and throwing snow balls after I got back from the gym yesterday. Yes... I actually went to the gym when it was SNOWING outside - no excuses, right? 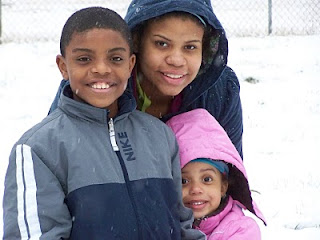 While I was at the gym yesterday, I was really inspired. While I was on the elliptical, an elderly couple came in and got on the recumbent bikes (the ones you sit in). They were both very short (around 5'1" - 5'3"), and very over weight. They both struggled with the bikes, but I was really inspired that they were at least TRYING. But the story doesn't end there...

When I moved over to the weight machines, I noticed they were also over there lifting weights! They would help each other on and off the machines, do as many reps as they could, and were working so hard! My mother came to mind (who is 5'1" and 300+ lbs and 75 yrs old), and I could only just wish that she had that same will. When I was done, I noticed the couple was struggling while trying to adjust one of the machines, so I went over to help them. I told the woman how I wish my mom would follow in her footsteps, and then she told me her story. How she used to be 350+ lbs, how she had to go through countless surgeries because of health issues associated with weight, and about how during her last surgery she died on the operating table. She was gone for 14 minutes! She said it was at that point she decided to take charge of her life.

She started off by walking to the end of her driveway (pushing her wheelchair). Then she started walking further and further until she could make it around the indoor track at the gym one time. Now she is trying to strengthen and tone. She has lost 100 lbs so far and says she will not give up! She has changed her diet, too, and now has got her husband on board with both diet and exercise. Honestly, I was so inspired by this woman I almost started crying! How can I ever complain about being tired, or not "feeling like" it, when this woman at her age and with her medical issues can do it?

A wonderful friend of mine always says, "It's never too late to become what you could have been." (Sorry, Ron, if I mis-quoted this!) You get the idea. Never give up!

I am very pleased that even though I've been stuck in the house today, I have stayed OP! Look at this delicious lunch! 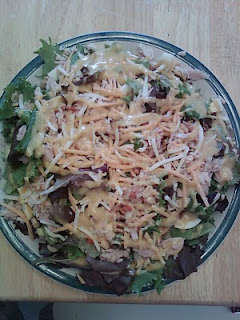 SO YUMMY! I have a new recipe planned for dinner tonight... I will post if it turns out as good as I think it will! Oh, and guess what? My gym is CLOSED today due to weather! It was actually shutting down early yesterday when I was there, so I am glad I got there in time. I think the kiddos and I will have a Wii tournament this afternoon, which should burn plenty of calories and be a lot of fun!
Posted by Hollie at 11:32 AM